A swan is believed to have died from heartache after a group of teenagers destroyed her nest and smashed several of her unhatched eggs. 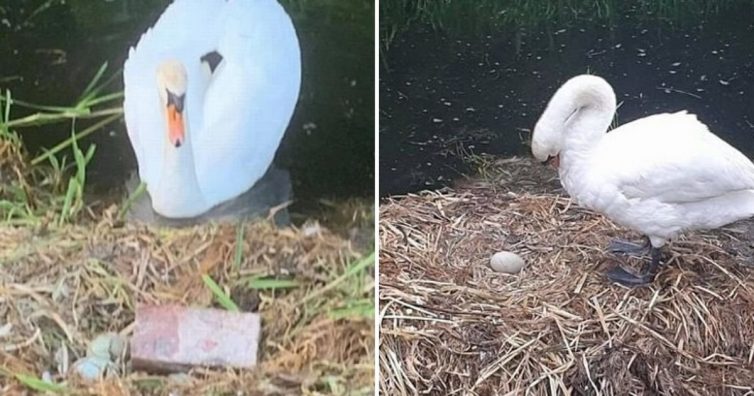 The incident occurred in Greater Manchester, England, where a group of alleged teens started throwing bricks at the island where the birds had been nesting on May 20.

According to Manchester Evening News, only three out of six cygnets survived the attack whereas their father left the nest and hasn’t returned following the traumatic experience.

Not long after the eggs were destroyed and the male swan left due to what wildlife experts believe to be stress, the mother swan was found dead in the nesting area.

As animal expert Sam Woodrow suggested, the mother swan most likely died “of a broken heart.”

“There’s not much I can say really. She probably died of a broken heart as she had a partner for life and he was driven away by stress,” they said.

According to the experts on swan behavior and life, the majestic birds typically choose one partner for the rest of their lives, and losing that partner sometimes leads to death from a broken heart.

“I really don’t want to do this post today because it comes with great sadness. I have tried to keep you updated on this swan who laid six eggs, three were destroyed by youths, she has then been harassed by dogs jumping in and harassed by a duck and moorhen and two more eggs were lost leaving her with one egg,” activist Michael Mason added.

“Her mate left her on her own and sadly I was informed this morning she was found slumped in her nest dead. I just feel like crying.”

Following the tragic death of the mother swan, the RSPCA confirmed that the incident is being investigated and warned that swans, along with their eggs and nests, are protected by the law.

What are your thoughts on this story? Let us know in the comments and don’t forget to SHARE this post with your family and friends and follow us on Facebook for more news and stories!